How Do 3D Glasses Work?

3D glasses aren’t really new. To be honest, you probably had them as a kid and didn’t even know it (remember the Viewmaster?)

While 3D seems other-worldly (and we admit, it IS cool), it is really nothing more than a special image, viewed by special glasses. In order for us to see things in “3D”, each eye must see a slightly different picture. This is done in the real world by your eyes being spaced apart about 3” (meaning each eye has its own distinct view). Try closing one eye – doesn’t everything look “flat”? That’s because your brain needs both pictures to form one image that has depth to it.

So that’s the basic thought behind 3D – an image is printed in two different colors, and each eye “sees” only one color. Usually the image is made of red and deep cyan (blue). That’s why most common 3D glasses have a red and blue lens (sometimes green is used instead of blue). So with the red/blue glasses, one eye sees the red part, the other sees the blue. Put them together, and viola’ – 3D

That’s also why a 3D image or film viewed without 3D glasses is “odd looking” – you see a red/blue fuzzy image. But put the glasses on, and your brain sees two separate images that it puts together and… LOOK OUT!!! Whew… that was close.

Although the red/green or red/blue system is now mainly used for television 3D effects, and was used in many older 3D movies. In this system, two images are displayed on the screen, one in red and the other in blue (or green). The filters on the glasses allow only one image to enter each eye, and your brain does the rest. You cannot really have a color movie when you are using color to provide the separation, so the image quality is not nearly as good as with the polarized system. 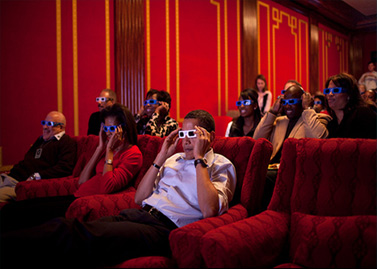 Make your own 3d Glasses (courtesy of NASA.gov)
http://stereo.gsfc.nasa.gov/classroom/glasses.shtml

3D and 3D glasses have their place in educational settings. For example, our Eclipse Viewing Glassesallow for the safe viewing of eclipses, and are something no science department should be without. Likewise our Fireworks glasses allow one to experience the power of light and color, and aid in the study of these important science disciplines.